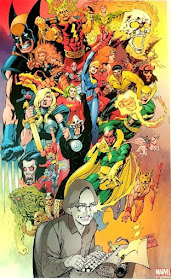 
A special thanks to Dann Thomas for always having the biggest smile in the room and enduring through the endless barrage of e-mails for this project.

What you are about to see is a Herculean labor called THE OFFICIAL ROY THOMAS CHARACTERS, CONCEPTS AND CREATIONS DATABASE!  What’s that you say?  Well, over the past year, my manager and friend John Cimino has made it his personal mission to collect and collate everything he could of my "contributions," such as they may be, to the comicbook field... and he's done such a formidable job that there are a number of concepts and characters listed which I had totally forgotten.  The result is, he and I both hope, a database which will be of considerable worth to both the researcher and the casual reader.  Naturally, it's not my--or John's--contention that my work over the past half-century plus has such unique merit that it should be catalogued and celebrated above that of others.  Rather, he and I hope by this thorough database to inspire others to create additional databases of their own, devoted to this artist or that writer.  If that happens, the field of comicbook history will be the richer for it.  Now, let's get into this thing shall we?

It's a bit hard to believe, when I look back at all the comicbook characters I was fortunate enough to get to co-create or at least co-develop.  But I'd grown up in smalltown Missouri loving comics, so when I got a chance to work in the field in 1965, at the ripe old age of 24, I grabbed it, and soon would be working for Marvel Comics and Stan Lee as his editorial assistant and "staff writer."  I suppose Banshee was the first super-type I dreamed up, although Stan wouldn't let the character be a woman, as he should have been.  I wasn't wild about the idea of making up heroes for Marvel, since I wouldn't own any part of them or be able to control their destinies past a certain point, but I did it anyway in the sense of heroes like Wolverine, Iron Fist, Warlock, the (second) Vision, Morbius, Black Knight, Son of Satan, et al.  Some of them I wrote... others I never (or virtually never) scripted but turned over immediately to other talented people to scribe, and they almost always did me proud. 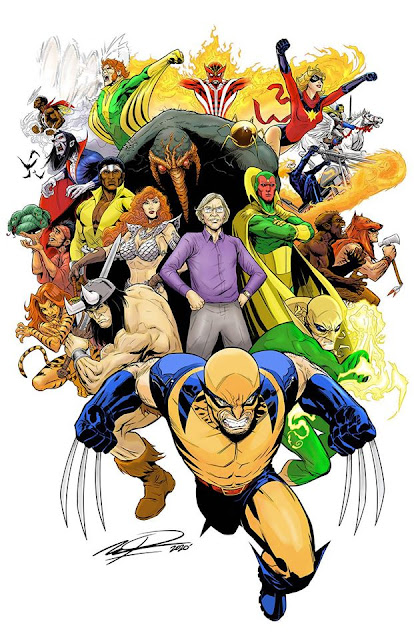 Of course, I co-created some characters for DC, too, in the 1980s... but my Marvel list is far more extensive, since it involves the period from 1965 to 1980, and then again from the latter 1980s through at least the tail end of the 20th century.  Actually, I just made up a few characters for my story in Marvel's SAVAGE SWORD OF CONAN #10-11 released in late 2019, and they are included here.  In other fields, Gerry Conway and I created the black Amazon Zula for the film that became "Conan the Destroyer" (even suggesting Grace Jones for the part, which worked out well)... and maybe I made up one or two for TV animation, as well... but I think I gave my best effort to the comics.  Naturally, John Cimino and I know we probably forgot somebody-or-other that will later occur to us (or to someone else who sees the lists),  and we hope and trust people will let us know if they run across some character or concept that I may have played a part in and simply forgot to list.  I don't want to take any credit away from anyone who deserves it--after all, I nearly always co-created characters with an artist at the very least, since the only characters I ever drew the first picture of as well as wrote were Hyperion, Nighthawk, Dr. Spectrum, and the Whizzer (of the Squadron Sinister/Supreme), 3D Man, and Union Jack (of THE INVADERS), plus audio-describes images of Man-Ape and Red Wolf and a few others that will be listed... but hopefully those folks have their own lists, which I applaud, or this database will encourage them to do so.

John Cimino:
What can you say about Roy Thomas?  His accolades in the comic business are almost without equal and his writing style was completely unique to anything that was being done at the time.  He was the first true fanboy of the medium to break into the field and brought along a fan-like enthusiasm with a vast wealth of literary knowledge to his stories which made them deeper than anything that had been done before.  While Stan Lee defined the 1960s with witty banter and contagious flair, it was Roy who took the reins from Stan and gave comic stories a new depth that even the most sophisticated reader could respect.  Roy blossomed into the best comicbook writer of the 1970s (as nobody won more industry and fan writing awards during that decade) and became Stan Lee's protégé and eventual successor as Marvel's editor-in-chief.
But enough about Roy's writing skills, let's get to his creations.  As Roy stated above; he didn't like to create comicbook characters because he knew he wouldn't be able to own them.  Well, maybe he should've practiced what he preached because own them or not, Roy Thomas has indeed created or I should say co-created a bunch of comicbook characters (and when we add in all the historical characters he revamped into comicbook form, the number gets even more ridiculous).  One thing I can say for certain is that there are probably only a handful of creators in the history of comics that have co-created more (even less if you want to talk about characters known all over the world that have shaped pop culture and brings in billions to Hollywood from movies and television for BOTH Marvel and DC--how many creators can make that claim??).  How many in total, we may never know the answer for certain, but from the size of this database--IT'S A HELLUVA LOT!!!
Yup, this thing is really BIG and was a monumental task to compile.  Roy and I both buckled down and did months of research; we went over Roy's "official" lists, had long phone/email conversations to gather information, dug through all our comics, got some assistance from others including collaborator Jean-Marc Lofficier and scoured the internet so many times we lost count.  What we discovered was there were so many minor and insignificant background characters that didn't have big roles in the stories or just had brief appearances, and there were also a bunch of revamped or alternate-reality versions of characters in stories from NOT BRAND ECHH, WHAT IF, CONAN, pulps, novels, literature and the like.  Same can be said about certain paraphernalia or vehicles Roy co-created that were so minuscule, they found their way into comicbook obscurity.  Things could've gotten pretty monotonous, but we like to be as complete as we can so we tried to get in the more important ones (can anyone say Adam Klink?), especially if someone or something had a few recurring roles or used by other writers in later years.  Hey, Roy has been writing comics waaay longer than I've been alive so there's literally thousands of pages of secondary characters he put into his stories, so we're sorry if  "Rocky," "Sally," "Mr. Calkin" and all the others don't make it in this database because we can only do so much.  Hopefully, if anyone locates a "Roy Thomas co-creation" we didn't list and thinks it should be, let us know and we'll add it.  Roy will even give you a nice shout out online on The Roy Thomas Appreciation Board on Facebook!  So, if you're not already a member, join today.
We think you'll enjoy the fruits of our labor with these comprehensive lists we put into three categories: MARVEL COMICS (split into 2 parts), DC COMICS, and MISCELLANEOUS (this category also includes all Roy's fan letters).  Included with each entry is a picture, listing of first comicbook appearance, who Roy co-created the concept with and any background information he wanted to include.  Hopefully all those mistakes on the internet about who created what (that drives Roy and I both crazy) can be put to rest.  We can't save everything in the comicbook world from wannabe historian trolls and fanboy mistakes but when it comes to Roy Thomas, at least we can do our part to give you the correct information straight from the source (so for crying out loud, Roy had nothing to do with the creation of Misty Knight and Polaris).  But we're not perfect either, so if you spot a mistake we made or have a question, let us know.  This is an ever-evolving database and we appreciate when fans give us more input to expand it further.
In ending, Roy and I hope you'll enjoy this project we put our "blood, sweat and tears" into (and yes, I cried a bunch of tears).  Through all the research and rewrites, I'm honestly very happy with the end result.  And the best part is, despite how much information is jam-packed into this thing, I've made it really easy to understand and navigate through, you can just sit back and enjoy the experience.  So here's to all the readers, researchers and fans; a fun and accurate resource on the comicbook magic of "Rascally" Roy Thomas, one of the greatest writer/creators of popular fiction and an exclusive member of the Mount Rushmore of Marvel Comics alongside Stan Lee, Jack Kirby and Steve Ditko. 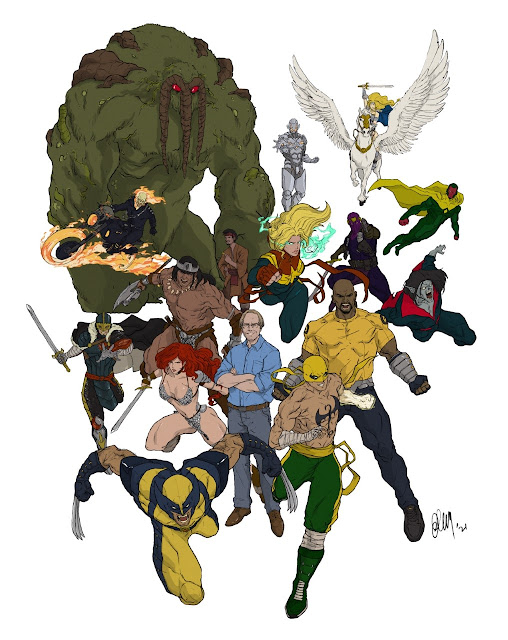 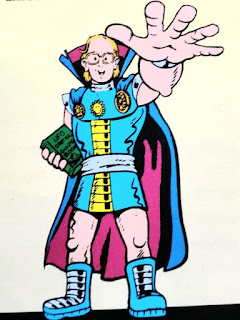 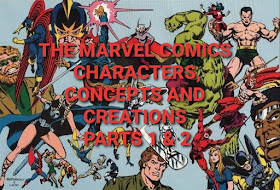 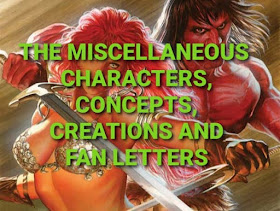 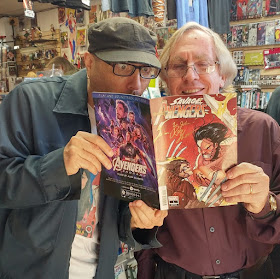 THE UNCANNY BUT TRUE CREATION OF THE WOLVERINE
http://hero-envy.blogspot.com/2018/04/the-uncanny-but-true-creation-of.html

THE SECRET ORIGIN OF THE JIM STARLIN THANOS BUST
http://hero-envy.blogspot.com/2018/09/the-secret-origin-of-jim-starlin-thanos.html